Subscribe to our RSS feed.Follow us on twitter.Like us on Facebook.Let's meet in LinkedIn
March 25, 2013 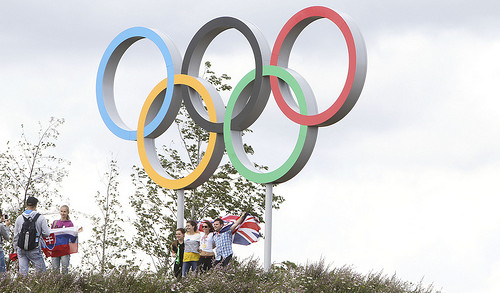 Help, I’m a Dilettante Trapped in the Olympic Village!

I perused a great article in Bloomberg or The New Yorker or something that the Olympic Village was the place to be if you wanted to have sex–raucous sex with athletes so beautiful they’d make Greek statues blush. With a few phone calls, I was able to get my way inside. (Thanks Uncle Fin!) Being a strapping 20-something, I was sure they’d assume I was just another Olympian and immediately try to vault their way into my pants.

That was a terrible mistake. I’m sending this message from the corner of Ballroom C in hopes that somebody will send assistance; there are only so many pages in this Esquire, I don’t know how long I can last. I thought these people would be merely extremely good looking, not make-you-feel-like-a-troglodyte good looking–saying nothing of the Chinese gymnasts over there, they’re not quite “developed” yet. Either way, I feel ignored, and to tell you the truth: a tad bit peeved.

I mean, come on, who pays these people, anyway? When’s the last time I ever said to myself, “You know, I need a letter delivered in style; time to look up an Olympic marathon runner in the Yellow Pages!” It’d probably be at least a few years back. How about, “I want to ride on the back of a majestic creature without having to find a trained dolphin. An Olympian will do.” Okay, probably not so long ago with that one. Plus, dolphins don’t have tits, so there’s that.

All I’m saying is that these people are parasites in our economy. They steal our hard-earned dollars to stuff their faces with pancakes and bacon all day (I’m looking at you, Michael Phelps) and then frolic around until they get tired. Nothing in my house was made by an Olympian. There were no Olympians on the factory floor that made my Mercedes. (It’d be marked up even more from all the pancakes the workers would be eating.) I just don’t see what they contribute to society; if it wasn’t for people like me, they wouldn’t have a single muscley leg to stand on – seriously, Usain Bolt’s quads are like fucking suspension bridge cables.

It’s just not fair. We put them up in these hotels where they just frolic around and have a lot of hot, sweaty sex, and then go on frolicking again in front of hundreds of thousands of onlookers. Then whoever frolics the best wins a medal; just like gold stars in elementary school! Who invented these games, anyway? And for all this, we build huge stadiums that go to waste after the games are done; hell, the frogs enjoy Athens’ swimming pool more than by people now. It stinks of a New New Deal to me–we’re pretty much just digging ditches and then filling them up again, except there’s advertisements this time.

I’m not sure how these people do it. I’ve got all the requisite gear, needless to say, including a shark-skin onesie. I’ve even tried working out to the training montage from Rocky IV and nothing seems to change! I have talent, but apparently my sport of choice isn’t good enough for the Olympic committee. When I was in boarding school, all the girls would swoon when they saw my lacrosse game. “Oh, look at his single-handed cradle! He’s so adept!” I even beat Stephen Perrywinkle III in a one-on-one match. How did we play one-versus-one lacrosse, you ask? Sorry, it’s very complicated and you wouldn’t understand. I don’t care that it isn’t possible; who made you the god-overlord of field sports, anyway?

Regardless, the point is this: is lacrosse an Olympic sport? Nooooo, no it isn’t. The fact that these other sports are recognized is just a stroke of luck! All these fancy-pants gymnasts get to do their whirly-whoops, but I’m not allowed to chuck a ball using a long stick with a net on the end? I only quit playing lacrosse because I found out that the American Indians invented it. I had been duped; people told me it was an American sport. I only play real American sports now, like the good-ol’-Pigskin, kickball, and Ultimate Frisbee.

I just don’t feel welcome here. I keep catching weird looks. They have mocking eyes, like everyone is in on some kind of joke that I don’t get. One of them came up to me and told me that I had a nice tie. I know I have a nice tie! What did he really mean when he said that? Probably something like, “I’m better than you at everything imaginable in the known universe. You’d probably get at least a bronze if tie-tying was a qualified sport, though. Congratulations!”